By randomrobotics on June 28, 2012 in android, Android Open Accessory

So my last post was about how, from looking at the Sessions list for Google IO 2012,  it looked as though Google had abandoned the hardware they presented at last year’s Google I/O. Now that IO 2012 is going on, we have some more information about what they’ve been doing.

More interestingly for me (and other robotics enthusiasts), is the remarkably quiet news that there’s a new ADK in town.

The ADK 2012 is still based on Arduino, but I haven’t found much info on it yet. The only picture I’ve seen is over at the Arduino blog. Apparently they distributed “a limited number” of them at IO, but it  wasn’t mentioned in the Keynote, like the original ADK was (now called ADK 2011).

There’s supposed to be an app in the Google Play Store for it, but the link is currently dead, and the app doesn’t show up in a search.

I’ll keep trying to find some information on it. Last year I got super-lucky and managed to snag one from a Googler at MakerFaire San Mateo, but since I’ve moved to New Hampshire I don’t think I’m as likely to bump into a Googler…

On a side note, since upgrading to arduino’s 1.0 environment I can’t get my ADK to work any more. It’s disappointing that Google hasn’t been keeping the documentation up to date, and has released an entirely new version without providing any support to the last one.

(Thanks to Frenky for pointing this out)

Screenshots from the app, as shown in Play Store: 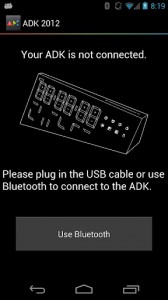 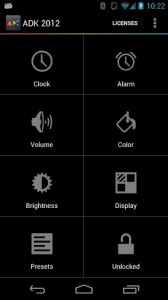 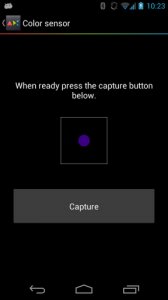 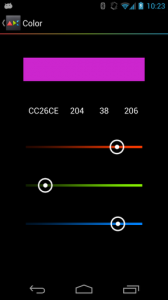 Looks like this one has Bluetooth capabilities, which is promising. Now, if only I could get my hands on one, I’d love to test it out 🙂
Of course, the software would have to be available too, and the repository doesn’t seem to be working, I get this

The instructions are here: http://developer.android.com/tools/adk/adk2.html#src-download.

View all posts by randomrobotics →
Lack of hardware focus at Google IO 2012?
What do I want from the Internet of Things?

8 Responses to Hardware at Google IO