By randomrobotics on March 27, 2011 in industrial robots, interface

We humans love to scare ourselves with what we can accomplish. Horror movies, roller coasters, even robo-coasters, we enjoy creating something for the explicit purpose of making us nervous and scared.

Whenever we make a demonstration with our industrial robots that demonstrates lightning-fast speed, someone always wants to push it to the next level. For instance, some coworkers recently programmed the Adept Quattro robot to play the iPhone game “1 to 50” in the lab. This required a finger on the robot that would trigger the capacitive touch screen, and a suitable finger was found (from someone’s leftover Halloween collection).

Once we started sharing the video, we started getting comparison to the infamous “Knife trick” performed by Bishop in the movie Aliens, and people asking if we could put a knife on the robot and do it as fast as in the movie. For example, this guy, but faster.

Now, of course we could. But the idea of putting a knife on an industrial robot just sends the wrong message. Big industrial robots are already inherently dangerous as it is, that’s why there are volumes of safety manuals and regulations regarding them and how to protect humans from them. That’s not to say there aren’t useful applications for robots with knives, such as this demonstration of ham deboning.

The idea of arming a robot with a knife and standing in its work envelope should worry anyone, even when demonstrating safety controls. Check out the brave soul at the end of this video.

But in almost every situation, robots wielding knives are scary! Even when they’re demonstrating cool technology, such as this haptic device interface from Quanser showing banana surgery (there’s a more thorough explanation here, about 2 minutes in).

As much as I enjoy demonstrations of technology and speed, I’m probably not going to be arming my robots with any sharp objects in the near future. Certainly not the industrial ones, but even the cute little robots appear scary when they’re armed. I love what’s being done with the Kinect and the Nao in this video, but as cute as the robot is, when wielding a knife it’s still a “toy gone horribly wrong” movie about to happen. 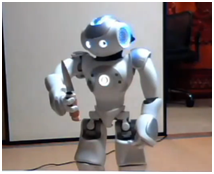 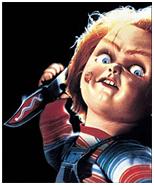 View all posts by randomrobotics →
Coolest Robots of 2010
Where are the Android Accessory Developers?

One Response to Robots With Knives!