By randomrobotics on June 15, 2010 in industrial robots, mobile robots

Adept Technology, a leading provider of industrial robotics and automation (and my employer), announced on Monday that they would be acquiring MobileRobots Inc, a provider of industry leading autonomous robot and automated guided vehicle (AGV) technologies. I’ve been at Adept for about 10 years, and have been involved in some pretty cool technologies over the years. . However, nothing quite compares to the excitement of this venture into mobile robotics.

MobileRobots may be best known for the Pioneer robot that dates all the way back to 1995, when MobileRobots was known as ActivMedia Robotics (I think I even applied for a job at ActivMedia, back when I was graduating college).

The Pioneer was a reliable and inexpensive platform targeting universities and researchers, and helped advance intelligent robotics. 15 years later they’re on the Pioneer 3-AT and Pioneer P3-DX. But of course they haven’t just stuck with one robot, there seem to be dozens of platforms from them, such as PowerBot (payload up to 100kg), PeopleBot (human interface research, popular as a tour guide, perhaps a telepresence bot in the future?), and some pretty powerful outdoor robots, Seekur and Seekur Jr. Check out the video of the Seekur robot pulling a Suburban in the parking lot.

In terms of software, it sounds like they’ve done a lot of development on their own API, and have a pretty solid foundation. Their Motivity core boasts powerful software and hardware solutions, advertised as “people-aware” to automatically handle being around dynamic environments and respond accordingly. 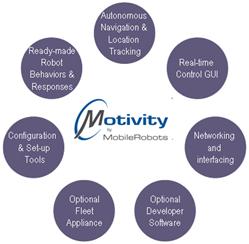 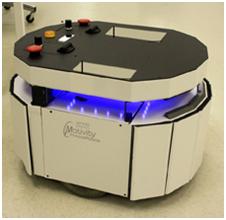 There are a lot of questions about how this merger will amplify the technology of each participant. Will we be integrating the autonomous vehicles into the factory, where production lines can be kept running by delivering parts from robots, (vs. human labor)? Will Adept’s industrial mechanisms be merged onto the platform, opening new avenues for grasping and manipulating objects? What, if anything, should we take from the youBot offering from KUKA displayed at Automatica in Germany? (read the full article from IEEE Spectrum). Based on communications from Adept, it appears the long term focus will be on production logistics – using the mobile platforms in a machine tending application for production environments .

At a company meeting after the announcement, we got to see a live demo of the MobileRobots software technology, and watch as their robot navigated through the office. The MobileEyes and MobilePlanner software products really caught my attention. You can simply point it to a destination and the robot will automatically navigate its way there, avoiding dynamic obstacles (like people in the hallway), or even designating a route to patrol and collect data.

I’m excited to get my hands on their technology and see what I can do with it. It may take a few months for the integration of the companies, but looks like exciting times are ahead!

View all posts by randomrobotics →

Ready for the Robotics Virtual Conference?
Welcome to CreepyTown